Listen to anyone who has made the recent move to Hilton Head Island or a similar area what they enjoy most and you're likely to get a long list of reasons why beach living is simply the best. Aside from human perception about the relaxed way of living associated with coastal towns, there are medical benefits, too. 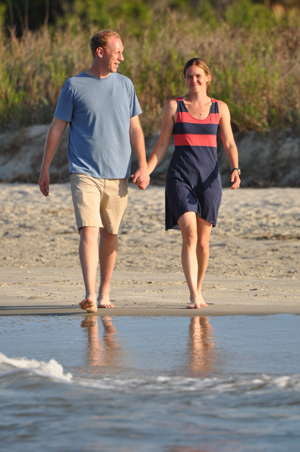 Research from British epidemiologist Lora Fleming seems to back up the poetic claims that beachside living is better for you. While the idea of visiting the beach for a bout of relaxation is not new (since doctors were recommending visits to bathing hospitals with saltwater bath treatments as far back as the 18th century), scientists have only recently begun to explore the link between coastal air and climate on human health.

The current project, known as "Blue Gym", is conducted by a group of scientists interested in how natural water environments like Hilton Head Island promote well-being in humans. Individuals who live closer to the coast reported better health than individuals living in other locations, according to the researchers. A slower pace of life, the opportunity to enjoy the outdoors peacefully, and the natural calming effects of water all contribute towards better mental and physical health for people living near the water. The fact that some people are encouraged to participate in regular physical activity also means that the coastline can be better for your waistline, too.

Water sports are plentiful in coastal areas, all of which can promote exercise and the release of endorphins that serve as mood boosters. Paddleboarding, swimming, kayaking, and snorkeling are all activities that bring people peace and joy while burning calories. Although it hasn't been studied scientifically in great detail, many people report simply feeling relaxed while listening to ocean sounds. Those not lucky enough to live on the coast go to great effort to replicate the experience by using sound machines or meditation music that mimics running water or crashing waves.

The research is even being extended into the medical field, simply showing people photos or videos of the ocean while they are undergoing procedures in dental offices. Early results indicate that people report lower levels of pain when they feel they have been "immersed" in a coastal setting.

People who move to Hilton Head really get the best of both worlds. The desire to live near the beach has brought many attractions and culture to the area, alongside incredible restaurants. Whether you're looking for an action-packed day or a simple stroll on the beach, you can have both within just a stone's throw from one of the many Hilton Head beachfront condos. Although full results from the research haven't been published just yet, it's clear there are numerous benefits to living near the beach. Which ones will be your favorite?

Russ specializes in oceanfront and waterfront property in the Hilton Head Island, Bluffton and Beaufort areas. Getting out on the water and enjoying the coastal lifestyle is Russ's favorite thing to do.

If you are in the market for water oriented real estate then Russ is the guy to call.

Russ On Google Plus